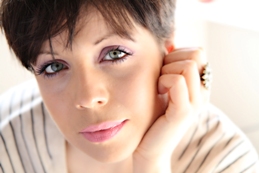 Hello, I’m Hannah Brine and I’m so pleased to have become involved with this exciting choir.  I already run similar choirs; Victoria Park Singers in 2013, Kensington Singers in West London in 2011 and Fosse Singers in Leicester in 2007, all of which are now well established.

I teach singing and have lead school choirs as well as the first ever scratch choir at a music festival, at Summer Sundae Weekender in 2010, 2011 and 2012. I conduct office choirs for Selfridges, and Jones Day for Music in Offices, and have also delivered choral projects for the Parkinson’s Society, UK Green Buildings Council and De Montfort University. In 2011 I studied with the Association of British Choral Directors and am now on their advanced conducting course.  In 2015 I was delighted be awarded the BBC Music Unsung Hero’s award for my work with Victoria Park Singers.

I love all styles of music from classical to pop and aside from conducting I have performed at venues including the Barbican with Wynton Marsalis, NEC, Birmingham Symphony Hall, various jazz festivals and on released dance and chill out tracks including on Black Hole, Café Del Mar and Buddha Bar.

Passionate about working with singers from all backgrounds and creating a supportive learning environment, I look forward to welcoming you to MamaSing.

Children from MamaSing and Mini MamaSing will be performing Carmina Burana in Exeter Cathedral on 13th April 2019. They will be performing alongside EMG Symphony Orchestra, EMG Singers and EJML Choir from Rennes in France. A concert not to be missed!