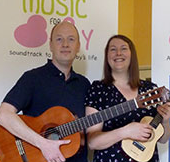 Mike Eaves – is the music guru of MamaSing.  He creates all the backing tracks, and also engineers and produces all the live recordings.

Mike’s music career began at 16 as the guitarist with the National Youth Jazz Orchestra.  He became a very sought after musician working in TV (including Pop Idol, BAFTA Awards and Royal Variety Show), West End Shows (including The Lion King, Les Miserable, Sunset Boulevard), Film (screen roles including Confetti and Martin Scorsese’s  Hugo), concerts and solo performances.  Artists he has worked with include: John Williams, Shirley Bassey, Chaka Khan, Cleo Laine, Russell Watson, Will Young, Lulu, and some of the UKs Top Orchestras including The London Symphony Orchestra, Royal Philharmonic Orchestra, BBC Concert Orchestra and BBC Symphony Orchestra.  He also composes music for film and TV including with his most recent commissions used on CBeebies.

Children from MamaSing and Mini MamaSing will be performing Carmina Burana in Exeter Cathedral on 13th April 2019. They will be performing alongside EMG Symphony Orchestra, EMG Singers and EJML Choir from Rennes in France. A concert not to be missed!